Clearly Chicago was the place to be. Common presented his new music festival AAAH! and seems like every one is creating a festival now.  The festival took place at the Union Park in Chicago. It was a star studded event with Kanye West, Jennifer Hudson, Lupe Fiasco, Lil Herb, Mc Lyte, De La Soul Jay Electronica and Diggy Simmons.  Check out the clip below of the performance of Kanye and Common.

The LA Clipper Blake Griffin is covering the October issue of GQ magazine and in it he opens up about so many different issues that he has come encounter with from being a new father, his thoughts on Donald Sterling and religion stand point.  Here is a piece from the interview when he was asked about Donald Sterling

"When the draft lottery came out and the Clippers said they were gonna draft me, I went to Google to find out more about the Clippers, because I didn't know a lot. And I was like, "Okay, team owned by Donald Sterling." So then I typed in "Donald Sterling" in Google, and the first thing that pops up is "Donald Sterling racist." And I was like, "Whoa!" So obviously I explored that, read a whole bunch of articles, read the deposition at one of his court cases. Which was awesome, if you ever have time to read some of the depositions" 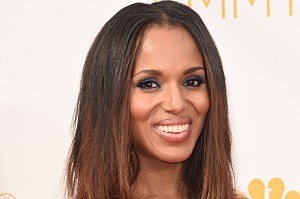 Calling all my Gladiators! During her round of media Kerry Washington shared that she teamed up with designers Lyn Paolo and Elliot Staples  and created the “Scandal” inspired line that will be held at  The Limited. So not only do you have to watch Olivia Pope you can now dress like her.  Check out the interview here!